Do you have a passion in your life that makes your soul come alive?  Does surrounding yourself with this one thing inspire you and awaken a unique energy inside of you that you can hardly contain? Music has been a lifelong passion in my life for the reasons I mentioned above. This post is about the abandonment of this passion, and how its presence returned stronger than ever in a moment that I will never forget.

This post has actually been a year in the making.  The moment that inspired this post came to me last year while I was attending Lollapalooza, a 4-day music festival in Chicago. I never got around to writing it then, even though the moment that inspired it brought me so much emotion that it was overwhelming. I guess I just wasn’t ready. This post is a journey through a snapshot of my past and the light of my present.

But first, a little background on my relationship with music

Music has been a significant part of my life since I was in elementary school. I remember my first album, Alanis Morissette’s “Jagged Little Pill,” and how obsessed I was with the song Ironic. I appreciated the creativity behind the lyrics and the emotion in her voice always gave me chills.

As I grew older, music continued to inspire me and fill my ears at almost every moment of the day. It amazed me the way that artists crafted rhythms and tempos with lyrics in order to write a musical story.

When I was old enough I was involved in every single band I could be a part of in school — concert band, symphonic band, wind ensemble, jazz band, pep band, marching band. This continued through college. I wanted to create music just as much as I wanted to be enveloped in its melodies. Creating music and meeting others who shared my enthusiasm towards the art brought an entire new level of passion into my life. 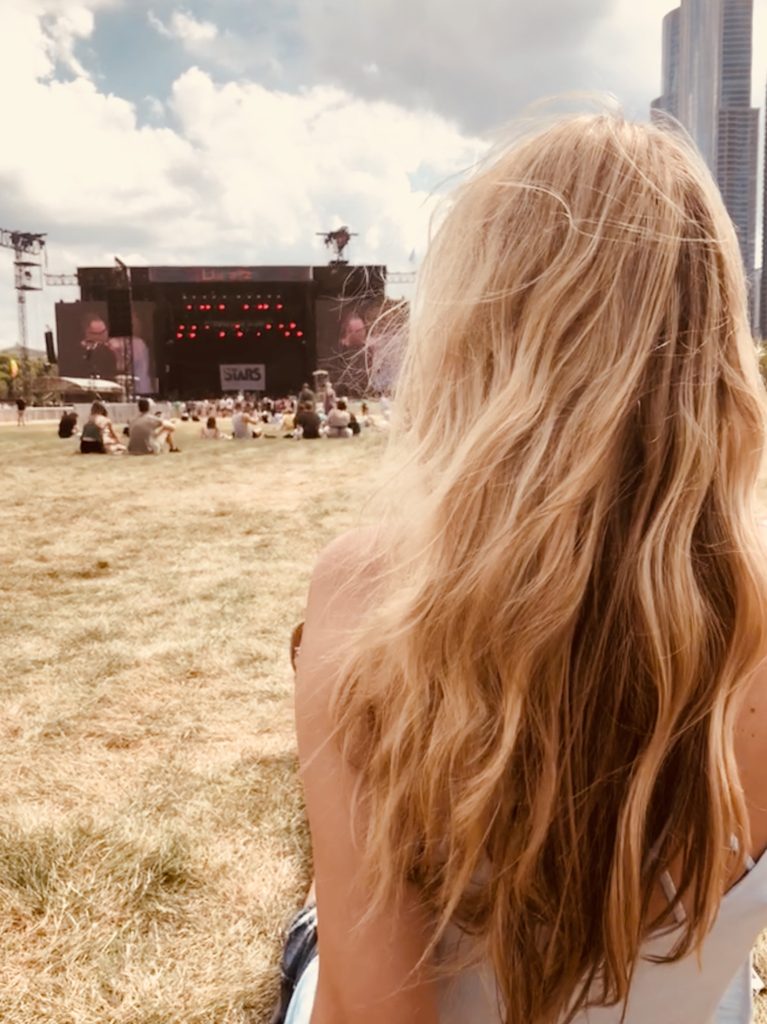 I find that this quote from a previous post that I wrote about my dad best illustrates how I feel about music: “Music has always been the language of my soul.  Music has made good times great, and it has made dark times bright. Perfect chords and rhythms help me disappear when I need to lose myself, and bring me back to reality when I am ready to be found. Music has kept me company during some of my loneliest of times, and creating music has led me to some of my best friends in life.”

You can probably see now why going to an all-day music festival is my ultimate happy place.

This happiness goes much deeper than just the music.  One of the most stunning views is going to a concert and watching people unite over the entire experience. If you want to see a group of people living in the present moment together, go to any concert. Look around at any second and watch as people feel every drumbeat, sing every lyric, and raise their hands high during the parts of a song that mean the most to them.  It’s truly an amazing sight to see. 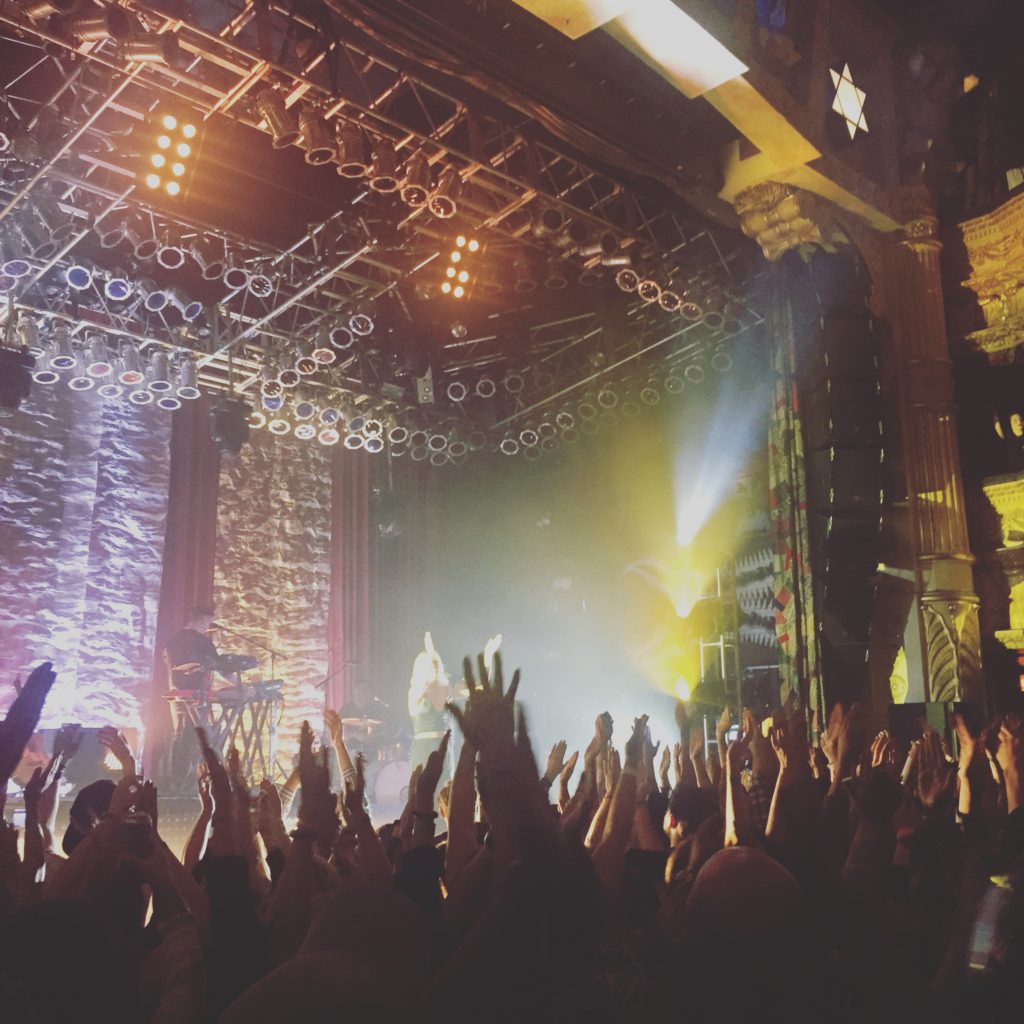 Now that you know a little more about my passion for music, I want to tell you a story.

After college I was in an extremely unhealthy relationship for close to three years.  Even labeling it as “unhealthy” feels like an understatement actually, but that’s what we’ll call it.  Unhealthy.

One day I was sitting on the floor in my apartment with my computer open about to listen to a new album that had just been released by one of my favorite artists. He was in the kitchen and I remember expressing to him how thrilled I was to finally listen to this album after having the release date on my calendar for months. My level of enthusiasm about new music had always been on par with the feeling a five year-old might have opening presents on Christmas morning. I could hardly contain my excitement.

I immediately turned off the song and shut my computer.  The familiar pit in my stomach that I felt so often throughout this relationship became deeper than it had ever been. Four words came into my head and created the phrase that would continue to brainwash me in the years that followed:

“Maybe he is right.”

For years music had been a light in my life and I chose to turn it off.

It took me a while after our relationship ended to truly hear the “music” again. By “music” I mean music in the literal sense as well as other parts of my life that I gave up over those years. I remember feeling like I was living my life all wrong, and that the person who I had grown up to be just wasn’t good enough.

Okay so Citrus and Sun is all about noticing those small moments in our lives that we need to pay attention to, right??  This includes the good, the difficult, the exciting, the sad, and everything in between.  When we pay attention to the moments that bring out emotion, we learn a little more about ourselves.  Sometimes that involves digging into past moments that we might not want to revisit.

And now for my moment!

Lollapalooza, 2017. The Killers are playing and I am in total heaven. Chuck and a few close friends are by my side, as well as what seemed like most of the city of Chicago.  The Killers begin playing the song “Smile Like You Mean It” and I completely lose it.  Tears are streaming down my face. I am singing and crying at the same time which was probably quite the sight to stumble upon.

But this moment was so much more!

I am so grateful for this moment at Lollapalooza. For so long I was holding on to anger, regret, and resentment over this time of my life.  In that moment, my tears began in anger and they ended in gratitude.  Gratitude for my recovery, the strength in the years after, for my family, for the life I live now, and for the MUSIC. The music that I turned on again. The music that continues to play the song of my life today. 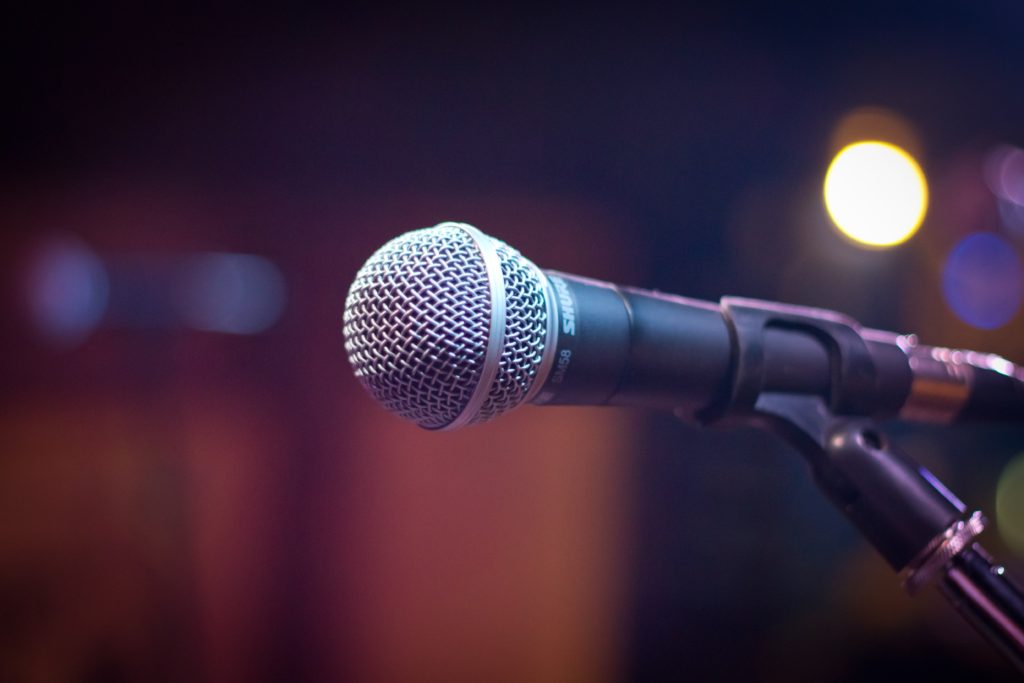 I used to think that talking about this time of my life meant that this person still had control over me in some way.  This is why this memory initially upset me in that moment. I remember thinking, “Why is he still in my head after ALL of these years??”

[ctt template=”2″ link=”b66a0″ via=”yes” ]Sometimes our difficult past creeps into our minds at the most random times not to bring us pain, but because it is trying to tell us something about ourselves. We just need to listen.[/ctt]

The answer: because whether I like it or not he WAS in my life.  Ignoring the difficult and uncomfortable seasons of our lives also pushes away valuable moments like the one I had during that song. Sometimes our difficult past creeps into our minds at the most random times not to bring us pain, but because it is trying to tell us something about ourselves. We just need to listen.

I believe that this moment happened in order to help me appreciate who I am today and feel gratitude towards my life. I also believe it happened so that a year later I would share this story in order to send out a message:

Whatever your life’s “music” is, hold onto it and don’t turn it off.  Take what inspires you, turn up the volume, and play it for the world. Every single musical note of your life is valuable, and your life’s song is an inspiration. Play it loud. 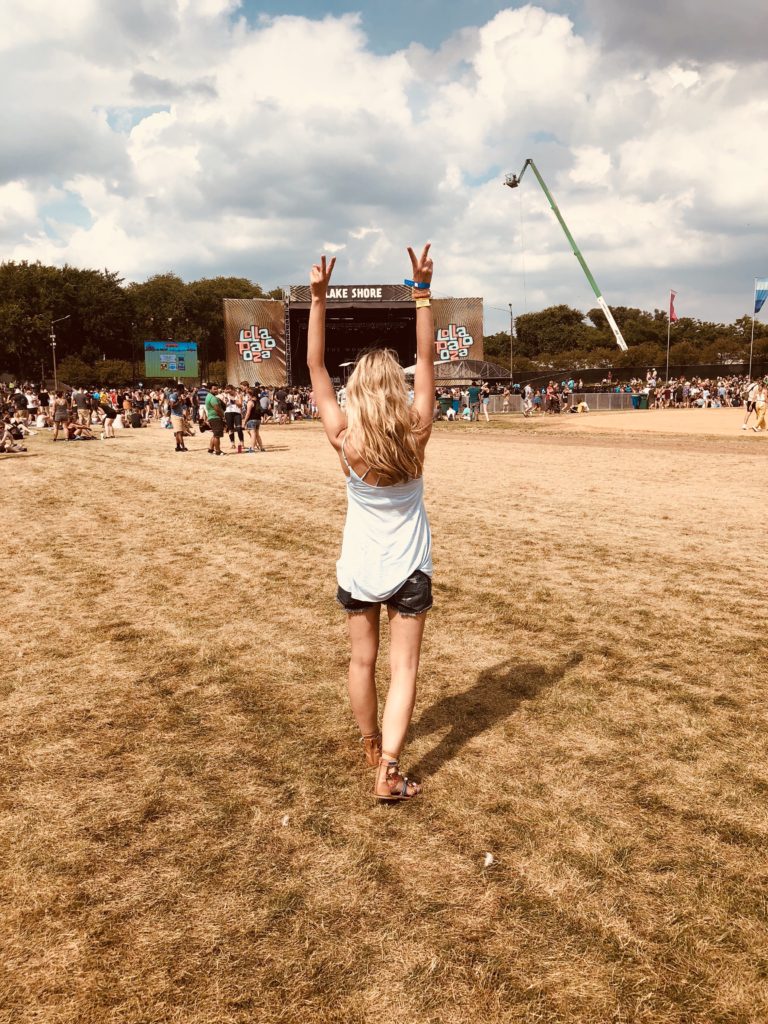 Add some Citrus & Sun to your inbox! 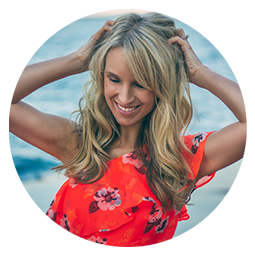 Hi guys! I'm Stephanie, and I want to thank you for stopping by my personal blog that is filled with honest thoughts from my world. More than anything, I hope to encourage and inspire you to find zest and light in all of the small moments of your life!